Welcome To The Home Of One Of The Nation’s First
Academic Esports Programs!

The mission of the Shenandoah University Esports program is to go beyond gaming and provide students with an opportunity to develop academically, competitively, and professionally in order to become innovators and leaders in the esports ecosystem.

Our vision is to set the standard for professionalism in the esports ecosystem. It’s a field exploding with opportunity.

The worldwide esports audience is massive, at 474 million, and there are more than 8 million active streamers on Twitch. Discord, also popular among gamers, Discord has over 140 million active monthly users and 300 million registered accounts, and is valued at $7 billion.

While the esports industry as a whole is already a billion-dollar business, it is expected to continue to grow, with an anticipated 2024 value of $1.6 billion, according to Statista.com.

According to Indeed.com, a gaming manager for Blizzard Entertainment, a division of esports juggernaut Activision Blizzard, can earn up to $155,000, while a freelance esports and video game writer can earn an average salary of $54,226, according to ZipRecruiter.

Shenandoah’s esports team competes through the National Association of Collegiate Esports (NACE) and the Mid-Atlantic Esports Conference (MAEC), with over 55 varsity team members playing seven esports titles against players at colleges and universities across the U.S. and Canada. The team’s on-campus home is in the Esports Arena adjacent to the Armory and has a private varsity practice space in Halpin-Harrison Hall. Shenandoah has one of the first esports arenas on the East Coast and the first collegiate, spectator esports arena in Virginia! The competitive team and students in the degree programs work hand-in-hand, allowing both groups to have the best esport experience possible, which will help them in college and long after.
Esports Arena
Esports Team Roster

Many college students grew up playing esports, and now, they can merged their love of esports with their degree.

Shenandoah University now has a varsity esports program, and plays teams from around the country as a member of the National Association of Collegiate Esports. Find out what games Shenandoah's teams are playing, who they're playing, and how esports is making inroads within academia. 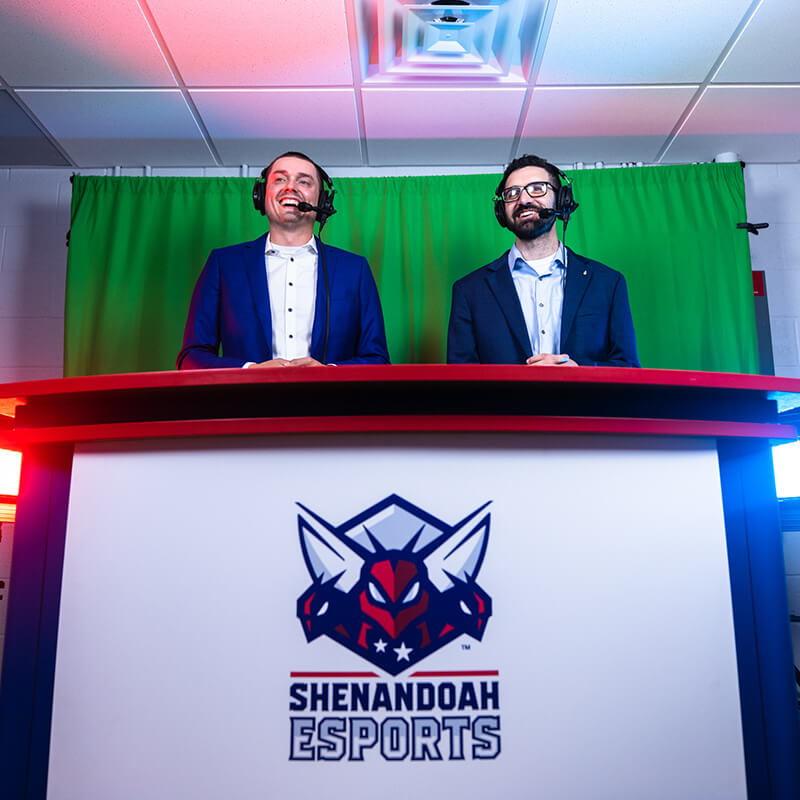 The esports field is perfect for anyone interested in event management, communications, gameplay, coaching, exercise science, or being part of a field that promises to grow more prominent and engaging with every passing year. For example, from 2018 to 2019, paid esports positions increased by over 110%.

As noted on CNBC by Peter Guber, a co-owner of the Golden State Warriors, Los Angeles Dodgers and the professional esports organization Team Liquid, being able to fill a particular place isn’t necessary for esports.

You'll see that it's everywhere, and it isn't bound by geography. You don't use a stick or a bat to play, and you can play alone or with a whole group of people, play against the best." 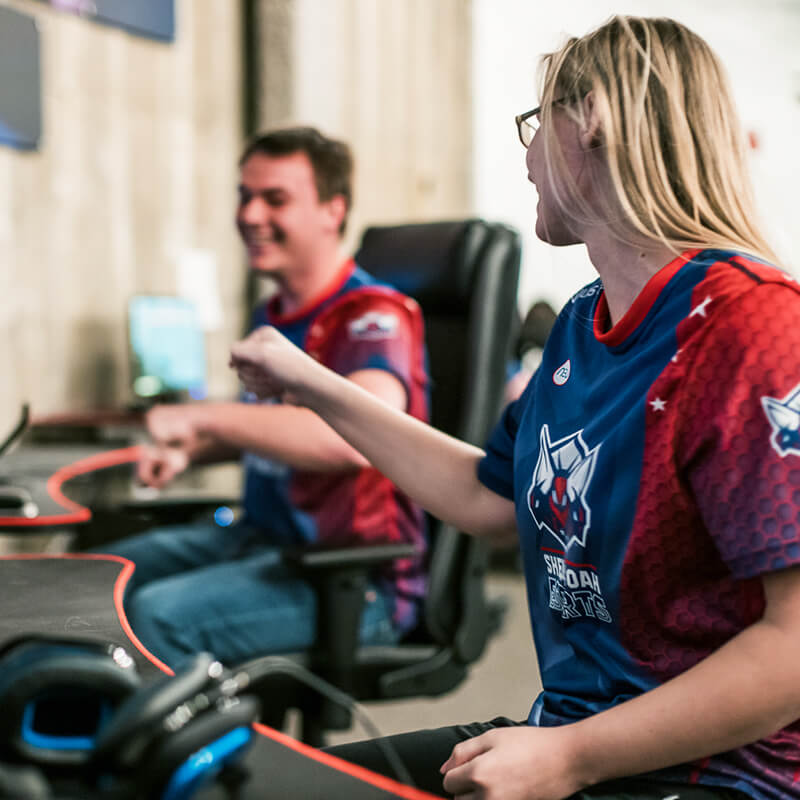 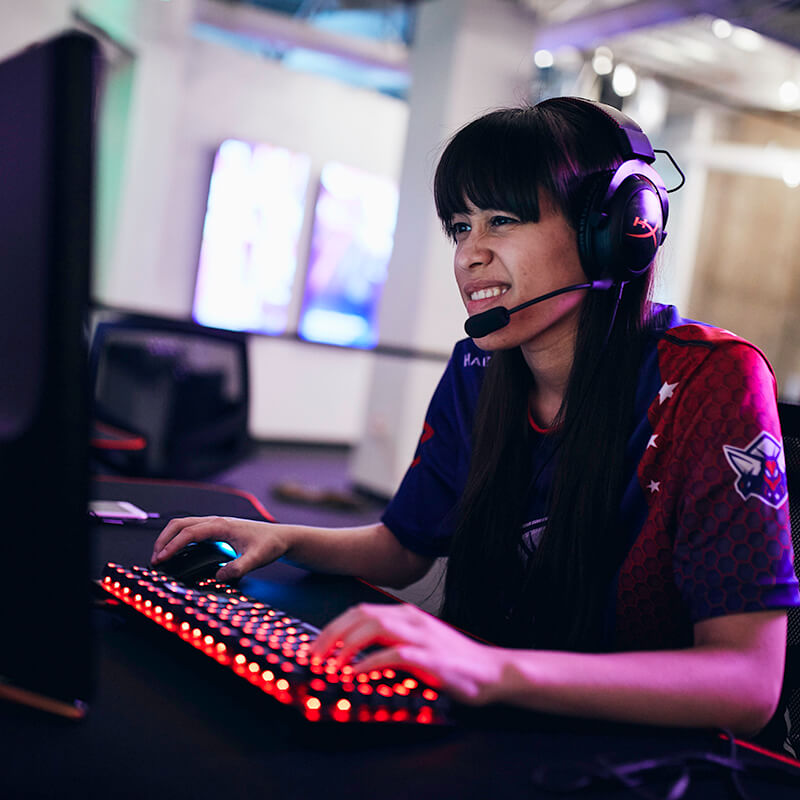 We’re ready to pick up the controller and play. 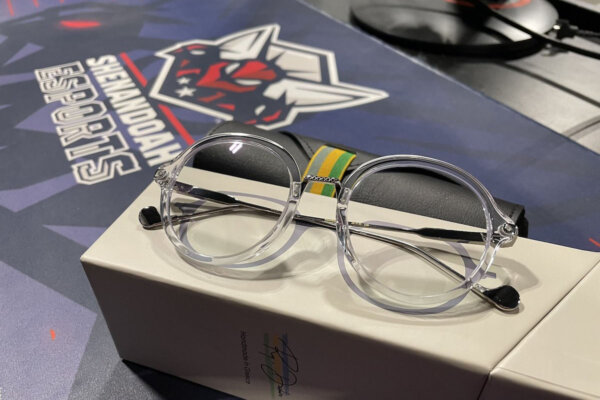 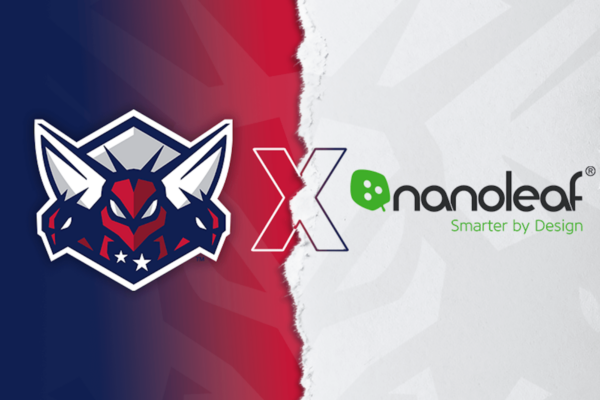 Shenandoah University’s Esports program is excited to announce its newest partnership with Nanoleaf, a pioneer in the smart-lighting industry. This partnership will boost the offerings of the esports ... END_OF_DOCUMENT_TOKEN_TO_BE_REPLACED Shenandoah University, in collaboration with its esports program, SU’s Veterans, Military and Families Center (VMFC) and the Warrior GMR Foundation, is hosting an esports event in honor of Veterans ... END_OF_DOCUMENT_TOKEN_TO_BE_REPLACED Joey Gawrysiak holds the controller in the world of esports academia.

He has made the international esports rounds, with appearances on podcasts, radio shows and even a cruise line, and has presented at several gaming and sport management events—including the Sport Management Association of Australia and New Zealand and the Music and Gaming Educational Symposium. He is the  National Association of Collegiate Esports (NACE) 2021 Esports Program Director of the Year and chairman of NACE’s Board of Directors. He also serves on the board of the Mid-Atlantic Esports Conference.

He has hosted esports tournaments and served as a guest lecturer and consultant for several universities.

Gawrysiak was a competitive gamer in Halo: Combat Evolved while in college.

Zander Merle-Smith received his Bachelor of Arts from Virginia Tech and MBA with a focus in Esports Management from Shenandoah University. He has plans to continue his education with an EdD in the future.

His previous experience as broadcast production lead, esports commentator, and event operations has given him the background knowledge to prepare the next generation for the esports industry. 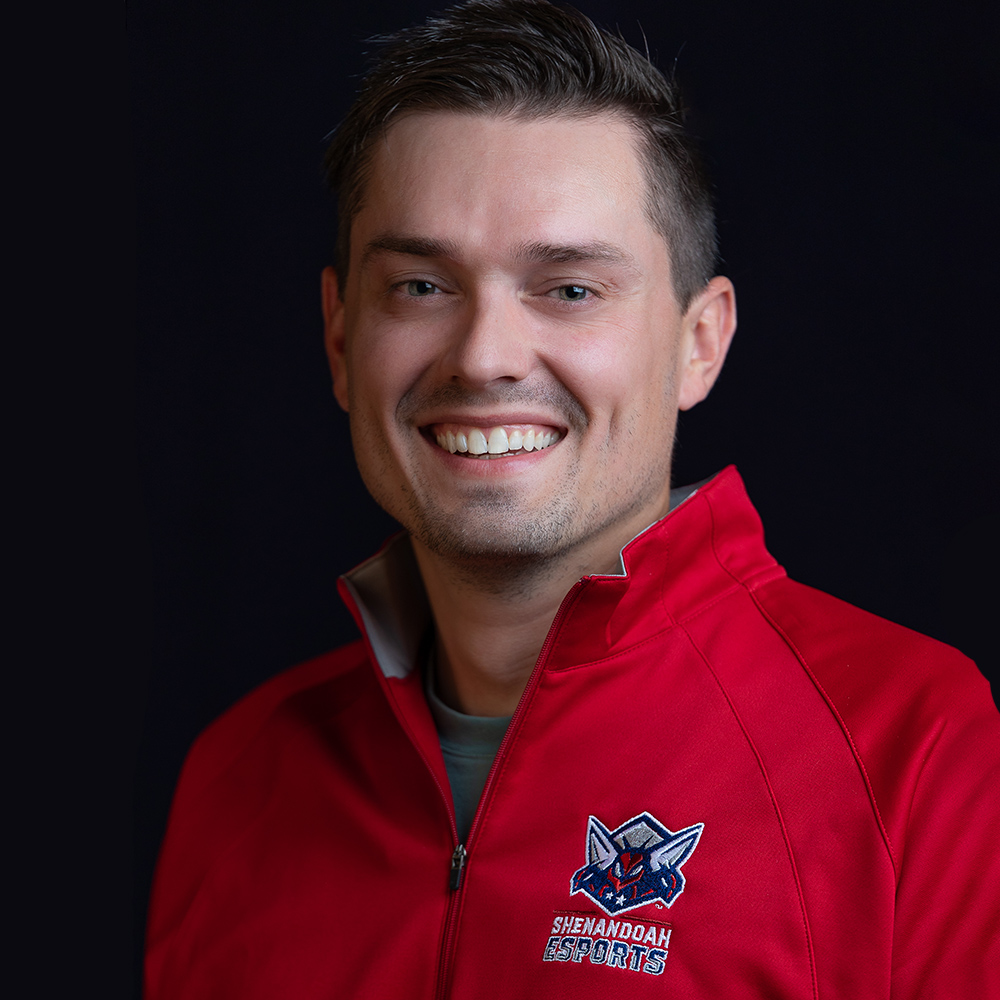 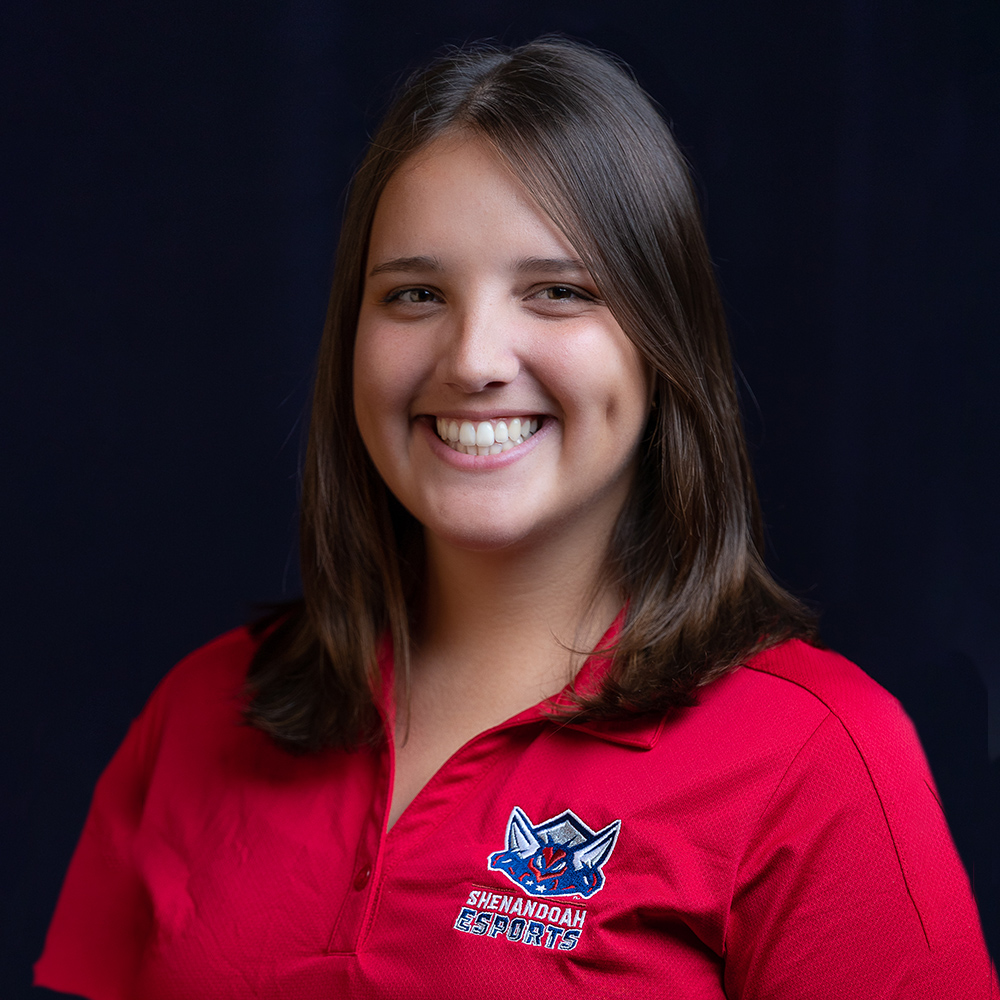 Alyssa Duran’s experience as a competitive player, captain, and coach prepares her for her work in the Shenandoah Esports program. As the Coordinator of Esports Competition she oversees the seven competitive varsity teams and coaches. Her educational background that she attained during her time at St. Ambrose University provides the basis for which she is able to meet incoming students at their level and work with them to become high level competitors. In the past, Alyssa has led her teams to earn conference championship titles and multiple LAN wins.

Alyssa has been recognized for her work as an advocate for collegiate esports through receiving NAIA Champions of Character (2021) and Outstanding Leader of the Year (2020) awards. Likewise, she has been featured on multiple news shows and podcasts for her work.

Sean has found success throughout the Shenandoah Esports program during his time
here. Sean Kelly graduated from Shenandoah University in May 22’ with a Bachelor of Science in Esports Management and a Bachelor of Business Administration. While at SU, he competed on the men’s soccer team for one year and on the varsity Overwatch team for two years as the captain.
Sean’s experience includes starting the broadcast production project at Shenandoah. Producing shows for companies such as Virginia High School League, AVGL, Stay Plugged In, and PlayVS. In addition, Sean Kelly has worked as a production intern for OS NYC, helping to reopen their space in Lower Manhattan after the pandemic.
Sean is currently working as the Coordinator of Esports Production and continues to grow the digital footprint of the program. He also is continuing to grow the next generation of industry leaders by teaching a broadcast and esports production class for undergraduate students. 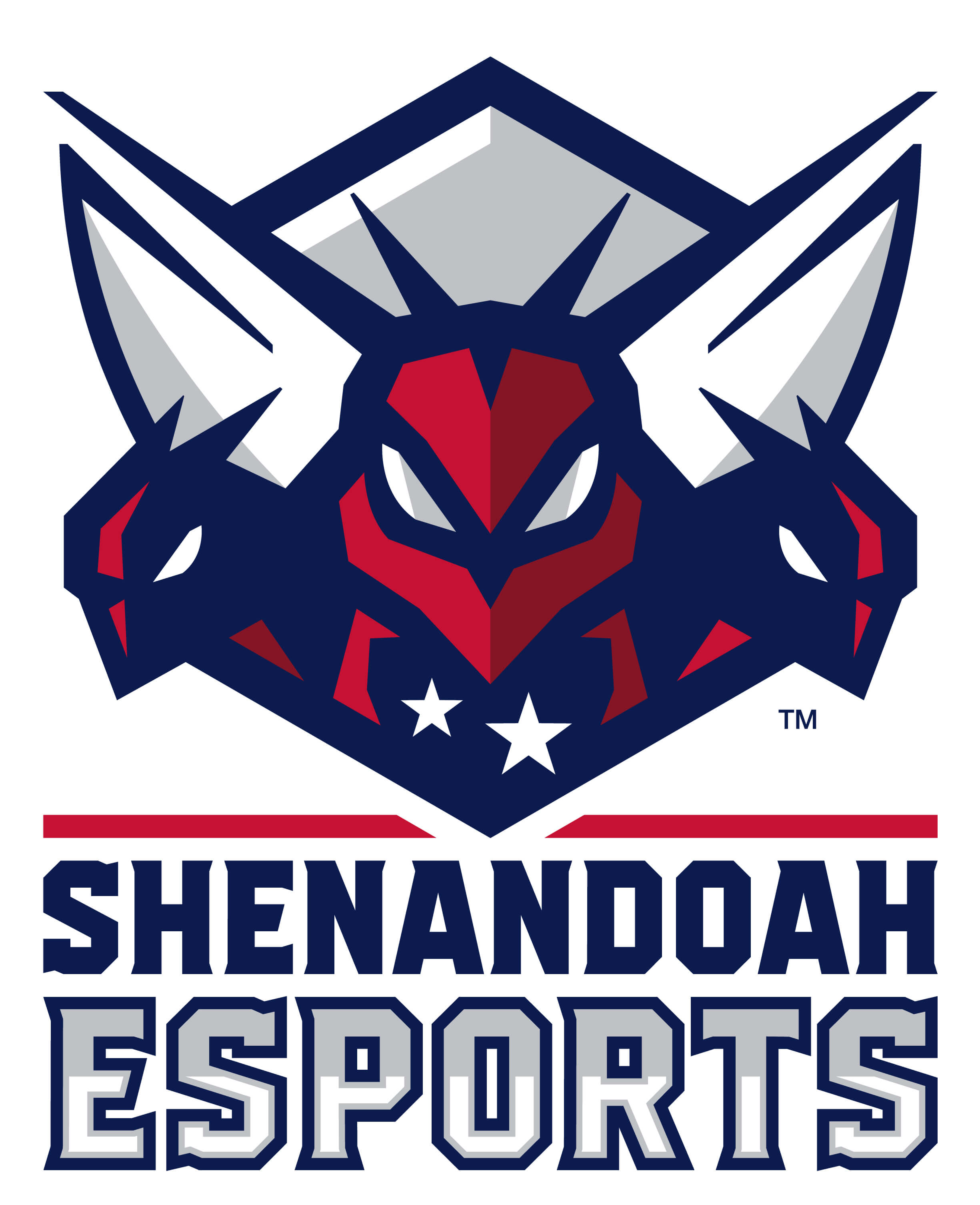