Welcome To The Home Of One Of The Nation’s First Academic Esports Programs!

The Esports Media and Communication Track of the Bachelor of Science in Esports prepares students for a career in the broadcast and production side of esports. Through international experiences like collaborations with esports employees and players from around the world and trips abroad, internships with major esport and video game companies, and hands-on experiences with industry executives as well as the varsity esports team at Shenandoah, they will be ready for careers like esports event producers, broadcasters, and streamers.

We at Shenandoah are proud innovators in merging academics with needs in the larger economy, and we recognize the growing power of the esports industry.

By 2021, global games market intelligence company Newzoo anticipates that “All major U.S. media conglomerates will have digital esports media rights,” and that esports will grow into a market bigger than that of traditional professional sports. We expect Shenandoah students and alumni to be an integral part of the action in a field that values quick and strategic thinking, mental agility, intellectual curiosity and creativity.

We’re ready to pick up the controller and play. Are you?

Shenandoah University has positioned itself as one of the nation’s premier leaders in esports academia with the creation of one of the first esports majors in the country. Shenandoah’s esports major helps prepare students and alumni to be an integral part of the action in a field that values quick and strategic thinking, mental agility, intellectual curiosity and creativity.

Shenandoah offers the most robust esports program in the country, featuring not only varsity competitive teams and club teams, but also undergraduate majors/minors/certificates in esports, a graduate-level concentration/certificate, and an online Coaching Certificate.

Through international experiences like collaborations with esports employees and players from around the world and trips abroad, internships with major esport and video game companies, and hands-on experiences with industry executives as well as the varsity esports team at Shenandoah, they will be ready for careers like esports event producers, broadcasters, and streamers.

The Career Services staff helps Shenandoah students search and apply for internships related to their major and career goals. Internships differentiate you as an applicant in your future job searches, provide hands on experience in your field, allow you to sample different career paths for your major, and help you find a specific position that fits your passion before graduation.

This is a world that needs a workforce. And those involved in the industry can be well-compensated. According to Glassdoor.com, a senior ecommerce operations manager for Blizzard Entertainment, a division of esports juggernaut Activision Blizzard, can earn up to $164,000, while a freelance esports and video game writer can earn up to $68,000.

The Esports Media and Communication Track of the Bachelor of Science in Esports prepares students for a career in the broadcast and production side of esports such as esports event producers, broadcasters, and streamers.

We focus on combining classroom learning with experiential learning through travel opportunities, partnerships with professional organizations, and our esports arena on the main campus.

Students will be able to take courses online, in person, or both through our new ShenFlex model.

The esports field is perfect for anyone interested in event management, communications, gameplay, coaching, exercise science, or in being part of a field that promises to grow more prominent and engaging with every passing year.

According to the World Economic Forum, the global audience for esports is expected to reach 380 million in 2018. Established sports franchise owners understand the potential of esports, with Jerry Jones, owner of the Dallas Cowboys, recently purchasing a majority stake in an esports organization, and the New York Yankees entering into a partnership deal with the investment group Vision Esports, as noted by The Esports Observer.

“I predict that by 2024 esports will actually have an Olympic event!” visionary/economist Bob Froelich is quoted as saying in the Chicago Tribune.

In 2018, a championship event for teams playing the game Overwatch brought near-capacity crowds to the Barclays Center in Brooklyn, New York, according to The Washington Post. The center holds 19,000 people. These kinds of events promise to only grow in size and scope.

But, as noted on CNBC by Peter Guber, a co-owner of the Golden State Warriors, Los Angeles Dodgers and the professional esports organization Team Liquid, being able to fill a particular place isn’t necessary for esports. “You’ll see that it’s everywhere, and it isn’t bound by geography,” he said. “You don’t use a stick or a bat to play, and you can play alone or with a whole group of people, play against the best.”

Recent numbers from the World Economic Forum show that “esports viewers spent 17.9 million hours watching their gaming heroes [on Twitch and YouTube’s gaming channel] in the first quarter of 2018.” And Twitch, a live feed service where people can watch others play video games, has five million active daily users.

By 2020, the industry’s anticipated more than $1 billion of worth will match or surpass the 2017 revenues cleared by the NCAA, as well as the social media influencers market.

We’re ready to pick up the controller and play.

Shenandoah’s esports team competes through the National Association of Collegiate Esports (NACE), with over 55+ team members playing seven esports titles against players at colleges and universities across the U.S., including Division I institutions. The team’s on-campus home is in the Esports Arena. Shenandoah has one of the first esports arenas on the East coast and the first collegiate, spectator esports arena in Virginia!

The competitive team and students in the degree program will work hand-in-hand, allowing both groups to have the best esport experience possible, which will help them in college and long after.

Many college students grew up playing esports, and now, they can merge their love of esports with their degree. Shenandoah University offers a varsity esports program, and plays teams from around the country as a member of the National Association of Collegiate Esports. 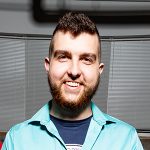 I’ve been spending most of my weeknights and at least one day on the weekend on campus working with the Esports teams. I am the captain of the Overwatch team, and we have practices three nights a week, and I would usually be in there an extra night to help whenever I could and hang out with the other people on the teams. Much like the dorms, the Esports program has brought a lot of people together and know we’re a close knit community, and we like hanging out together. So even though I live off campus, I spend a lot of my free time helping and hanging out.

Imagine participating in interesting conversations led by engaging professors who’ve already done what you dream of doing. You’ll be in a small class with professors who know your name, care about your success and provide advice as you pursue your academic and career goals. We are working to prepare students to enter this field as highly qualified individuals with a unique bachelor’s degree that will place them ahead of other people wishing to enter the field. Shenandoah has positioned itself at the forefront of the esports industry by offering students an environment to participate in and study esports in a number of different ways.” Faculty have had a massive impact on my life and education here at SU. Classes are only as good as the professor that teach them, and I’m fortunate enough to have an impressive faculty to support that. Almost all the professors I’ve had during my time here have made the effort to know every student, and what they have going on in their lives. They want to help us succeed, and it shows. Dr. Gawsryiak in particular has had a very large impact during my time here. When I heard about the new Esports team, I knew that the passion he had for gaming would all be channeled into making the teams as good as they possibly could be. I immediately joined and started volunteering for leadership positions and extra work, helping Dr. G however I could, and when I heard about the new academic programs — I wanted in. I have a love for gaming yes, but if it wasn’t for Dr. G’s passion and drive this program would never exist. He’s the reason I’m staying another year at SU to get the Esports minor, as well as working under him to build this unique program and team. I would say that in and of itself is pretty solid evidence of the influence SU faculty has.

The 1,571-square-foot arena accommodates the growing esports demand in the region. It serves as both a practice facility for Shenandoah’s 45-member varsity team and as a public esports venue where spectators can watch weekly matches.

The arena is mobile, so the equipment will be able to be packed up and taken on the road for matches and events off campus. This allows our esports students the chance to plan events for regional gamers and develop their management and communications skills.

Make studying abroad the highlight of your college experience! Whether you go for a year, a semester, or just a few weeks. You will never forget learning in another culture! The Center for International Programs is here to help you plan your study abroad experience. Start your planning early to ensure the courses you complete abroad count toward your degree and you graduate on time.

The Global Experiential Learning (GEL) Program offers Shenandoah students a short-term, faculty-led, study-abroad experience for academic credit.  These short-term, credit-bearing, faculty-led programs are offered winter break, spring break, and during the summer. If a course is not within your major, it might be used as an elective.
The 11th Esports World Championship were held in Seoul, South Korea, and Shenandoah’s Esports students were there!

Shenandoah University is back in the game for its third year as a Global Game Jam host site. The Global Game Jam is a 48-hour event at which participants create a game or games (video games or otherwise) based on a central theme announced for the year. At Shenandoah, it’s open to university students aged […]

END_OF_DOCUMENT_TOKEN_TO_BE_REPLACED Shenandoah University is excited to announce the return of a unique esports class this spring that will allow students to explore music and the role it plays in gaming and in society while also addressing global, cultural and social issues. The class, now a 400-level course titled “Music and Video Games” (ESPT 480), gives students […]

END_OF_DOCUMENT_TOKEN_TO_BE_REPLACED An October Shenandoah University esports program trip to Amsterdam to attend and evaluate the Dutch League of Legends finals – the first in-person esport event to be held at the H20 Esports Campus, one of the world’s top esports facilities – has resulted in a collaboration between Shenandoah and H20.  Shenandoah and H20 will formalize […]