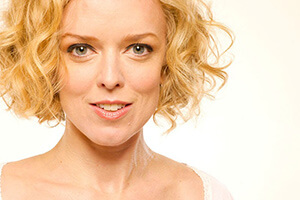 Nancy Anderson is a 20-year veteran singer, actor and dancer of Broadway, Off-Broadway and regional stages. Last year Anderson understudied Glenn Close in the Broadway revival of “Sunset Boulevard” followed by a Helen Hayes nominated performance as Gladys in “The Pajama Game” at Arena Stage in Washington, D.C. She made her Broadway debut as Mona in “A Class Act,” played the roles of Helen and Eileen in the Broadway revival of “Wonderful Town” and starred as Lois/Bianca in the national tour and West End premiere of Michael Blakemore’s and Kathleen Marshall’s Broadway revival of “Kiss Me Kate,” for which she received Helen Hayes and Olivier Award nominations. Great Performances audiences are familiar with her London debut as Lois/Bianca, which was filmed for PBS in 2002 as well as her featured performance in the Carnegie Hall concert of “South Pacific” starring Reba McIntyre and Brian Stokes Mitchell. Other television appearances include Madame Secretary (The Middle Way, “Alice”) and PBS’s Broadway: The American Musical as the voice of Billie Burke. Anderson is a three-time Drama Desk Award Nominee; in 2000 for best supporting actress as eight female roles in Jolson & Co., in 2006 for best leading actress in Fanny Hill and in 2017 for Best Solo Performance in the one-woman musical “The Pen.” She has thrice been nominated for the Helen Hayes Award: in addition to last year’s “The Pajama Game,” she was also nominated for her role in “Side by Side by” Sondheim at Signature Theatre in 2011. Anderson’s debut album “Ten Cents A Dance” led to a concert career ranging from sharing the Carnegie Hall stage with Michael Feinstein in his Valentine’s Day concert “Hooray for Love Songs” to singing with the Atlanta Symphony as well as regular appearances at the legendary jazz club, Birdland. Nancy received the 2011 Noel Coward Cabaret Award as well as a Bistro Award for her debut cabaret appearance at “Don’t Tell Mama” in 2004.