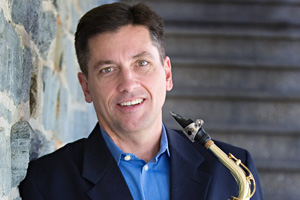 American Saxophonist Timothy Roberts, a native of Richardson, Texas, currently serves as Associate Professor of Saxophone at Shenandoah Conservatory in Winchester, VA. He recently retired as Principal Saxophonist and National Tour Soloist with the United States Navy Band in Washington, DC, where he was also Coordinator of the Navy Bands International Saxophone Symposium. As one of the Navy Bands premier concert soloists, Roberts performed for five U.S. Presidents, many foreign dignitaries, and hundreds of thousands of people throughout all 48 states and around the world from 1987-2011.

The Washington Post described his Kennedy Center performance of Jacque Ibert’s Concertino da Camera with the National Symphony Orchestra as “simply stunning.” A concerto performance with the Navy Band in Quebec City was reviewed by Le Soliel as “the audience enjoyed the fluid technique, lightness of tone, and impeccable playing of saxophonist Timothy Roberts.” In two separate solo appearances with the Dallas Symphony Orchestra, the Dallas Morning News noted, “Tim Roberts poured forth the creamiest, most gorgeous sounds ever heard from a saxophone, and phrased eloquently besides,” and “the especially deft, lovingly played saxophone lent his own magic.”

He performed at the 2012 Clarisax Festival in Medellin, Colombia, the International Clarinet/ Saxophone Festival in Nanning, China and the Australian National Band Championship in Hobart, Tasmania, and taught at the Paris National Conservatory, Arizona State University, the University of Florida, the University of South Carolina, and the Eastman School of Music, among others.

Roberts completed his Doctorate of Musical Arts degree from the Catholic University of America in 2006, where he also served as Director of Instrumental Ensembles for three years. He has had numerous pieces composed especially for him, including John Heins’ Concerto for Alto Saxophone and Wind Ensemble, and Wilfred Holcombe’s Blues Concerto for Alto Saxophone. He was also an influential advisor to John Mackey in the development of his Concerto for Soprano Saxophone and Wind Ensemble, one of the leading pieces for the instrument today.

His military decorations include a Navy and Marine Corps Commendation Medal and two Navy and Marine Corps Achievement medals, all given for his unique solo interpretations, his innovative work in the bands Tour Operations department, and his superb coordination of the Navy Bands International Saxophone Symposium. Under Roberts leadership, the International Saxophone Symposium is now the largest-attended saxophone event in the world today, featuring international artists including Branford Marsalis, Claude Delangle, Philippe Geiss, Fred Hemke, Masahiro Maeda, Barry Cockroft, and many others.

A strong proponent of music education, Roberts has published over thirty columns for Saxophone Journal. He has developed three popular master classes that have premiered on compact discs included in that magazine: one entitled “Developing a Disciplined Practice Routine”, a second that discusses the tenor saxophone music of composer Walter Hartley, and a third that teaches Dorothy Chang’s Two Preludes. A representative for Conn-Selmer, Selmer Paris, D’Addario (Rico Reeds) and Lomax Classic mouthpieces, he has also served four years as Secretary of the North American Saxophone Alliance.

An avid student of music and life, Roberts currently makes his home in Winchester, Virginia with his wife and two children. More information and examples of his unique performance style can be found at www.timothy-roberts.com.

Shenandoah Conservatory gives me the opportunity to teach and play in a disciplined and performance-based conservatory environment with some of the best musicians from the DC/Baltimore area, all while enjoying the beautiful natural environment of the Shenandoah Valley