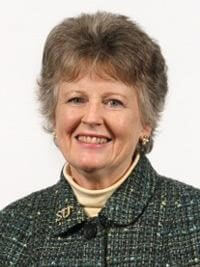 Pamela A. Bell ’71, ’83 watched her father work in broadcasting for more than 40 years and manage radio stations in Winchester for 22 years, and always wanted to follow in his footsteps.

Her father was a great example as Bell has flourished in the world of communications.

“I grew up at the station and learned all aspects of business,” said Bell. “I began working with creative people and it was intellectually stimulating to me. Each day in the communications field can be a new adventure.”

Bell began her media career in 1962 in radio at what was WHPL-AM holding many positions such as news director, staff announcer and copy writer. Listeners knew her best for her role as “Pam the Pixie,” who read children’s letters to Santa Clause over the air during the holiday season. While working at the radio station, Bell was able to attend Shenandoah University because of its close location.

“Having a college close by allowed me to continue to work while I attended classes to get my degree,” she stated. “The communications major wasn’t available when I was a student so I pursued a business degree, which led me to management positions.”

A year before receiving her degree in Business Administration from Shenandoah, Bell left the radio station and joined the Northern Virginia Daily as a general assignment reporter. During her 26 years at the Daily, Bell held a handful of positions such as retail advertising representative, classified ad manager, safety manager, human resources director and marketing manager.

In 2008, Bell left the Northern Virginia Daily and became the host of “Community Spotlight” on Comcast Cable Channel 6. After production of the show was cancelled, Bell became a staff member at the Winchester Star. She is the outside sales and multi-media sales representative.

“The biggest challenge in my area of work is the economy,” commented Bell. “Advertising budgets have been slashed and many more venues are available than just newspapers. I want to see newspapers prosper because they are such a value to their communities.”

Even with the tough economy and drastic change in journalism, Bell has worked harder and learned more to be able to be a success in the communications and media industry.

Bell has been a board member since 2005 and has also held the position of secretary. She is an avid supporter of Shenandoah and shows it through her involvement and willingness to help.

I look forward to continuing to work with the Alumni Board of Directors and advancement office to generate enthusiasm and support for the university,” Bell said. “I am also excited at the line up for the Shenandoah Summer Music Theatre and SU Performs for which I am a season subscriber.”

Not only is Bell active in the Shenandoah community, but she also gives back to the City of Winchester by volunteering. She serves on the Local Emergency Planning Committee and is a member of the Community Emergency Response Team (CERT). She is a volunteer at Wayside Theatre and Winchester Little Theatre, serves on the advisory committee of the San Damiano Spiritual Life Center at White Post, is a member of the fundraising committee of New Eve Ministries, and has served 12 years as a facilitator for a scripture study class at Sacred Heart of Jesus Catholic Church.

In her free time, Bell loves to travel and hopes to visit all seven continents. She has been to three thus far and says that cruising around Cape Horn was the most exotic of her adventures.