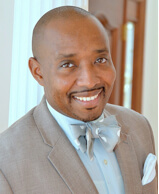 Shenandoah provided me with a world-class education.”

During his time at SU, McCoy was able to maintain his part-time music director position at
Covenant Presbyterian Church in his hometown of Petersburg, Virginia. He explains, “The pastor, choir and congregation there were so supportive of my desire to further my education. In fact, my church music professor, Dr. Steven Cooksey, so graciously allowed me to present my graduate choral conducting project “When In Our Music God is Glorified” at the church.”

Following graduation, McCoy began full-time work in Richmond, Virginia, at Capital One, Inc. as an associate in the Retention Department. After Capital One, McCoy became the minister of
music at Takoma Park Baptist Church in Washington, D.C. He moved to the D.C. area in 2006
and served in this role until 2012. During this time, he also taught vocal music at Rosa L. Parks
Elementary School in Hyattsville, Maryland, from 2006-2008. His work as a church musician
continued when he was hired as organist/choirmaster at Washington’s Trinity Episcopal
Church. Currently, he serves as organist and choirmaster at Saint John’s Episcopal Church, Zion Parish in Beltsville, Maryland.

After several years of writing concert reviews and articles for a variety of outlets and
publications such as CBS Washington, Artsong Update, Examiner.com and The Afro-American
Newspaper, McCoy was hired in 2012 as the performing arts columnist for the prestigious
Washington Life Magazine where he served as the performing arts columnist for more than four years. “For the publication, I have interviewed A-list figures in the arts and classical music, including violinist Joshua Bell, soprano Renée Fleming, mezzo-soprano Denyce Graves, Audra McDonald, Kristin Chenoweth, and my former teacher Robert Shafer, conductor of the Shenandoah Conservatory Choir and the City Choir of Washington, among others,” says McCoy.

While at SU, McCoy had the opportunity to study voice with Metropolitan Opera tenor Michael Forest ’85, ’86 on a weekly basis and other renowned members of the conservatory faculty. But, Dr. Darla Hanley, McCoy’s former SU professor, made the lasting impact. “In this new season of my writing career, I hearken back to the excellence she demanded in her writing assignments. When I stood before her and presented my work on the choral music of Undine Smith Moore, I never imagined that moment would prepare me to stand confidently on the Concert Hall Stage of The Kennedy Center, moderating a panel with conductor Julian Wachner, soprano Janice Chandler-Eteme and baritone Stephen Salters after a towering performance of Mendelssohn’s Elijah. Talk about a full circle moment!”

“Giving back to Shenandoah is an absolute joy,” expresses McCoy. He was very happy to be asked to apply to become a member of the Alumni Board of Directors. “Being on the board has given me ample excuses to return to the beautiful campus. In just nine years since my graduation in 2005, the campus has grown tremendously,” adds McCoy. “Sowing into the university financially is the least that I can do for a place that gave me great nurture during my graduate studies.”

McCoy is looking forward to being an ambassador for the university, especially in the Washington, D.C. area. “There are so many talented young people enrolled in performing arts schools here and I hope to introduce them to the jewel of the Shenandoah Valley.”

McCoy’s fondest memories at Shenandoah include being one of the founding members of the
Black Student Union and singing in the Harambee Gospel Choir. He explains, “Both of those
groups added another sense of family and community and for me that was very essential
while living away from my loved ones and family.” McCoy always admired how personable
President James Davis was. “It’s not often that you find a leader that really wants to know
what the students want by personally speaking to them. Our new president, Dr. Tracy
Fitzsimmons, has taken on that same type of gracious humility and I admire her greatly.”
McCoy recalls shaking Dr. Davis’ hand after receiving his diploma and then shaking Dr.
Fitzsimmons’ hand. “Now, she is the first woman president of Shenandoah!” Singing as guest
soloist for chapel, reading scripture at his graduating class’ baccalaureate service and seeing
Dr. Miles Davis so sharply model the dress of a gentleman and scholar has left indelible marks
upon McCoy.

McCoy’s parents have supported him every step of the way. He fondly states, “My family is amazing! There has never been a moment that they have let me down.” In January of 2017, McCoy suffered the devastating loss of his mother Velma Ann McCoy-Pulley. “She was my biggest fan and supported all of my musical pursuits,” he reminisced.

In his free time, McCoy enjoys watching movies, exploring new restaurants and occasionally
visiting the Washington museums like a tourist. “I also love to collect vintage records, especially those by celebrated opera singers such as Beverly Sills, Joan Sutherland, Leontyne Price and Jessye Norman and following the careers of a new generation of singers such as Sidney Outlaw Lawrence Brownlee, Soloman Howard, J’Nai Bridges, Morris Robinson, Russell Thomas and many others.

“So many exciting things have happened recently. I am thankful to God for all His many blessings,” expresses McCoy. He was named among the Forty Under 40 for Prince George’s County in 2013 because of his contributions to the Arts and Humanities.

Recently, McCoy returned back to his undergraduate alma mater Virginia State University as guest conductor of the Virginia State University Concert Choir while his mentor and former professor, Johnnella L. Edmonds was out on medical leave for the semester. In addition, he taught studio voice and prepared students for performances. “I never imagined I would conduct the very choir that I sang in as a student at VSU,” he reflected.

Currently, McCoy lives in the Metropolitan Washington D.C. area where he is active as musician, freelance journalist and moderator. He most recently led a panel discussion on Blacks in Classical Music for the Coalition for African Americans in the Performing Arts, an arts advocacy group encouraging diversity in the arts. McCoy is a member of Alpha Phi Alpha Fraternity, Inc.