A new app that recreates scenes from the 1864 Battle of Cool Spring is now available for download.

Through Their Eyes is a collaboration between Shenandoah’s McCormick Civil War Institute and the Shenandoah Center for Immersive Learning (SCiL).

The app has two components:

The 360 augmented reality experience can be done anywhere. Those who download the app can scan any flat surface and a map appears showing the contours of the Cool Spring Battlefield, which is located in Clarke County off Va. 7. Users can tap on any one of a dozen flags marking a designation on the map where a particular regiment fought. They are then instantly transported into a moment in the battle that is recreated by volunteers, students and living historians.

An example of this includes a scene that centers around the account of Lt. Col. Thomas Wildes, 123rd Ohio, where he describes the fate of a sergeant in that regiment, Sgt. Davis, who was mortally wounded at the battle and carried off the field by his comrades. Aware that he was putting those who carried him off the field in great danger, Davis requested they put him down on Parker’s Island and save themselves. Wildes’ account notes that the sergeant, fearful his personal items would fall into Confederate hands, buried them in a log. At some point between July 18 and the following day, the sergeant passed away. When the 123rd Ohio crossed back over to Parker’s Island on July 20, they discovered what the sergeant had done.

This example offers an opportunity to explore not only the battle’s tragic consequences, but also the battle’s impact on the family Davis left behind.

“It’s a revolutionary, non-invasive way to interpret a battlefield with greater depth,” said Director of the McCormick Civil War Institute Jonathan Noyalas ’01, M.A. “We are able to create such an immersive, personal experience, connecting you with people involved, that you can’t get from a printed brochure.”

The second part of the app is an immersive audio tour in which participants can walk the battlefield and hear an audio account of particular soldiers and their experiences while also learning what happened to that soldier, either at Cool Spring or in the conflict’s aftermath. The app uses GPS satellite data to determine where the participant is on the battlefield and syncs this with specific soldiers’ accounts. We’re trying to create an intimate, powerful experience that will aid individuals to better understand the personal stories of soldiers who fought at Cool Spring and the impact the battle had on them — a stark reminder of tragic consequences of what happens when a people become divided to an unbridgeable point. Both augmented reality experiences draw on the accounts of about two dozen Union and Confederate soldiers.”

Wes Brown, AR/VR developer in SCiL, served as the developer of the app, with several students aiding in the process.

Both he and Noyalas are unaware of any U.S. battlefield that has anything like this — a GPS-driven app that can also create a 360 experience on a 2D device. The way it interprets the 360 video is not common practice. I’ve never seen anything like it. It’s new and kind of revolutionary.”

The unveiling of the app took place March 24 at Cool Spring. 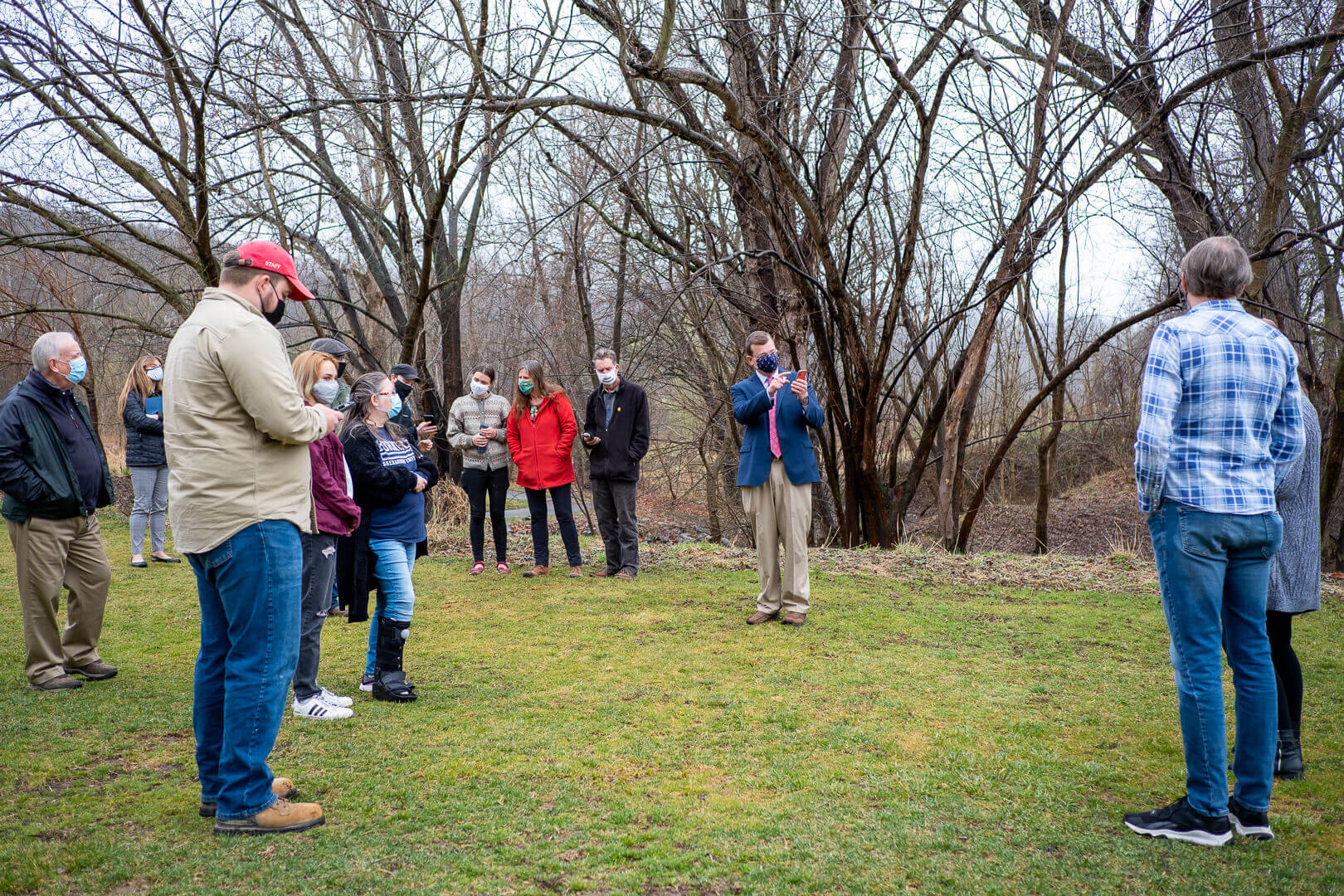