Arlene Moore Thorpe (C ’75) retired from her position at CM Bradley Elementary School at the end of the 2020-2021 school year after 13 years of service.

Ford Dieth (C ’95) will serve as the interim head of school for St. Martin’s Episcopal School in Metairie, Louisiana. 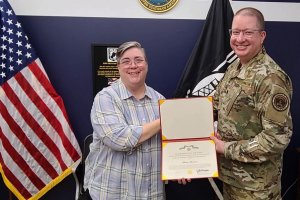 Chad Roberts (B ’09) was named regional general manager for the southwest for Door Services Corporation, located in Texas.

Jenna Pinchbeck (C ’11) was featured in an article on BroadStreetReview.com for demanding that the Walnut Street Theatre in Philadelphia, Pennsylvania, be more diverse, equitable and inclusive.

Shaylin O’Connell (HP ’17) was named to the Loudoun County High School Hall of Fame in June 2021.

Andrew Burrill (C ’18) recently served as executive producer and casting director for a film about life after COVID-19.

David Greene (C ’77) passed away on Dec. 30, 2017. He was a lifelong entertainer; he worked as a vocalist for Seabourn Cruise Lines for many years. David loved music and theater throughout his life.