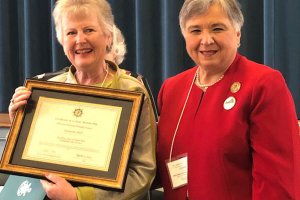 On April 2, 2022, Pam Bell (AS ’71, AS ’83) was honored by the Virginia District of Pilot International for 50 years of membership at its convention in Portsmouth, Virginia. Bell joined the Pilot Club of Winchester in 1972 and twice served as its president. She served as Virginia District Governor in 1978-79. She is currently a member of the Pilot Club of Harrisonburg. Pictured presenting Bell (on left) with a certificate and plaque is Pilot International President Collette Cross of New Albany, Mississippi.

On March 21, 2022, Betty Kilby Fisher Baldwin (B ’86) and her cousin, Phoebe Kilby, gave a presentation titled, “A Conversation with Betty Kilby Baldwin and Phoebe Kilby” at Lord Fairfax Community College in Warrenton, Virginia. During the presentation, they discussed their new book, “Cousins,” published to wide acclaim in 2021. Mary K. Tedrow (AS ’99) was featured in an EducationWeek article entitled, “The Importance of ‘Learner-Centered’ Professional Development.”

Gerald “Jerry” Carter (EL ’00) was inducted into the Virginia High School Hall of Fame. He is the athletic director of Liberty High School in Bealeton, Virginia. Andrea Diggs (C ’02, ’04) is an adjunct professor of flute at Shepherd University in Shepherdstown, West Virginia. (Pictured to the left.)

Candice Perkins (AS ’02, AS ’03) was named the Albemarle County (Virginia) director of planning.

In March 2022, Bronwen Landless (C ’04, C ’13) successfully defended her dissertation “Therapeutic Songwriting with People Experiencing Homelessness: Exploring the Impact on Participants and their Surrounding Communities” at Drexel University as the culmination of her Ph.D. in the Creative Arts Therapies program.

Daniel Smith (AS ’05) was named the Loudoun School System Chief of Staff.

In August 2021, Erica Gionfriddo (C ’06) was invited to Austin, Texas — a UNESCO-designated Creative City of Media Arts — to represent the United States in the City to City program. They collaborated through the rest of the year with artists Meiyan Chen (Karlsruhe, Germany) and Taeheon Lee (York, United Kingdom), on “told-hold,” an interactive, hybrid media performance piece inspired by the program’s theme: play. Visit arcosdance.com/told-hold to learn more about the collaborative process and to experience the work. Dan Merceruio (C ’06), along with Leslie Ann Jones and Michael Romanowski, received a Grammy Award for Best Immersive Audio Album for the “Soundtrack of the American Soldier.” The project was created with The United States Army Field Band and Soldiers’ Chorus under the leadership of conductor Col. Jim R. Keene. It was released in August 2020, on Navona Records. (Pictured to the right.)

James Schoppe (C ’12) was featured in an interview by WTOP about the 25th anniversary farewell tour of Jonathan Larson’s Tony Award and Pulitzer Prize-winning ‘Rent’ as produced by The National Theatre in Washington, D.C. Visit wtop.com to learn more and experience the interview. On March 3, 2022, Alexander Bernstein (C ’16), performed a recital series of Beethoven’s works held in the Harty Room at Queen’s University Belfast, Northern Ireland. He performed Beethoven’s Sonata No. 29 in B-flat Major, op. 106 (“Hammerklavier Sonata”) and the first Bagatelle from op. 126. The concert was open to a live audience and livestreamed. (Pictured to the left.)

Kelsey Morris (N ’16) is the full-time nurse practitioner at the new Minute Clinic inside the CVS Pharmacy in Ruckersville, Virginia.

On March 7, 2022, Natalie Stys (C ’18) performed with Catapult Entertainment at James Madison University’s Forbes Center in Harrisonburg, Virginia. The shadow-illusion company was featured on season eight of “America’s Got Talent.” Lily Farrar (C ’21) is a member of Odyssey Dance Theatre, which is based in Salt Lake City, Utah. (Pictured to the right.)

In February 2022, Ashley Rivette (C ’21) traveled to Rüsselsheim, Germany, to perform as a member of DanceWorks Chicago for the organization’s Hallo, Deutschland! 2022 tour.