The Shenandoah Conservatory Bass Ensemble began in 2007 under the direction of Donovan Stokes. It performs on campus each semester and has made concert appearances in venues throughout the region. In 2009, the Bass Ensemble was featured in a performance for the International Society of Bassists Convention. I had so many electrifying experiences at Shenandoah which helped make me the musician I am today. Working with different faculty and students really helped to expand my understanding and appreciation for not only the style I have been studying (jazz) but other genres like classical, musical theatre and contemporary music that can be written for artists like dancers or other musicians.

I also loved the opportunity to collaborate with Shenandoah Conservatory’s ShenCoLAB which gives students the chance to get out of their comfort zone and give and receive information about any aspect of music or even raise different everyday questions that strive away from music.

Shenandoah is an amazing place and will welcome you into their community with open arms. Teachers and students will bring out the best in you and can help you realize a lot about yourself that you never even knew. Shenandoah helped me reach for the stars and, thanks to my love of music and all of the amazing resources that Shenandoah has to offer, I am now an accomplished graduate student!”

– Adam Abrams ’21 (Bachelor of Music in Jazz Studies)
Adam has earned a spot in the prestigious jazz studies program at the University of North Texas where he will study with the highly acclaimed jazz composer and educator Alan Baylock ’90 (another Shenandoah Conservatory alum!) He just completed a summer engagement as a member of the Shenandoah Summer Music Theatre’s pit orchestra for “Grease!”

Stokes has given classes and performed as soloist throughout the United States, in Mexico, Norway, Italy, England, France and the Czech Republic. He is regularly seen at the Richard Davis Bass Conference in Madison, Wisconsin, the International Society of Bassists Conference and at the Milt Hinton Institute (Oberlin). The 2017/18 season will mark his first appearances in South America.

A full professor at Shenandoah Conservatory of Shenandoah University, he teaches jazz and classical bass, and acts as coordinator of strings. He offers a range of online instruction and has created an Upright Slap Bass Instructional Video available exclusively online. As a composer he has enjoyed commissions from Barry Green, Blanka Bednarz, The International Society of Bassists Young Bass Division, the Valdosta Symphony Orchestra and Jerry Fuller, among others. He is also and expert in the life and work of bassist Rodion Azarkhin and writes a regular column on the double bass at www.notreble.com.

Stokes is also a board member for the International Society of Bassists, past-president of the Virginia String Teachers Association, and artistic director of the Bass Coalition and its annual Bass Workshop where he head a highly selective a one-week Intensive Program for advanced bassists. Learn more at www.donovanstokes.com or find him on Facebook, Twitter, Snapchat and Periscope. “I chose Shenandoah because of the individualized instruction. Due to the small class sizes, I could receive one-on-one time with almost any instructor I desired, and the faculty are exceptional, especially the private music teachers. At Shenandoah, I was able to perform in the Jazz Ensemble, Jazz Combos, Little Big Band, Bass Ensemble, EDGE Ensemble and Symphony Orchestra, and I was offered numerous other performance opportunities and extracurricular jams/gigs.”

Alex Kimble ’21 (Bachelor of Music in Jazz Studies) is currently performing throughout the Mid-Atlantic region with newgrass group Jack Dunlap and Robert Mabe, which blends everything from traditional bluegrass to country to jazz, to create their unique sound. He is also a member of the Daniel Kelly II Trio. Daniel "D.K." Kelly ’18 (Bachelor of Music in Jazz Studies) is another SU alum and a fantastic drummer, and the trio is set to record a live album later this year.

Bachelor of Music in Performance 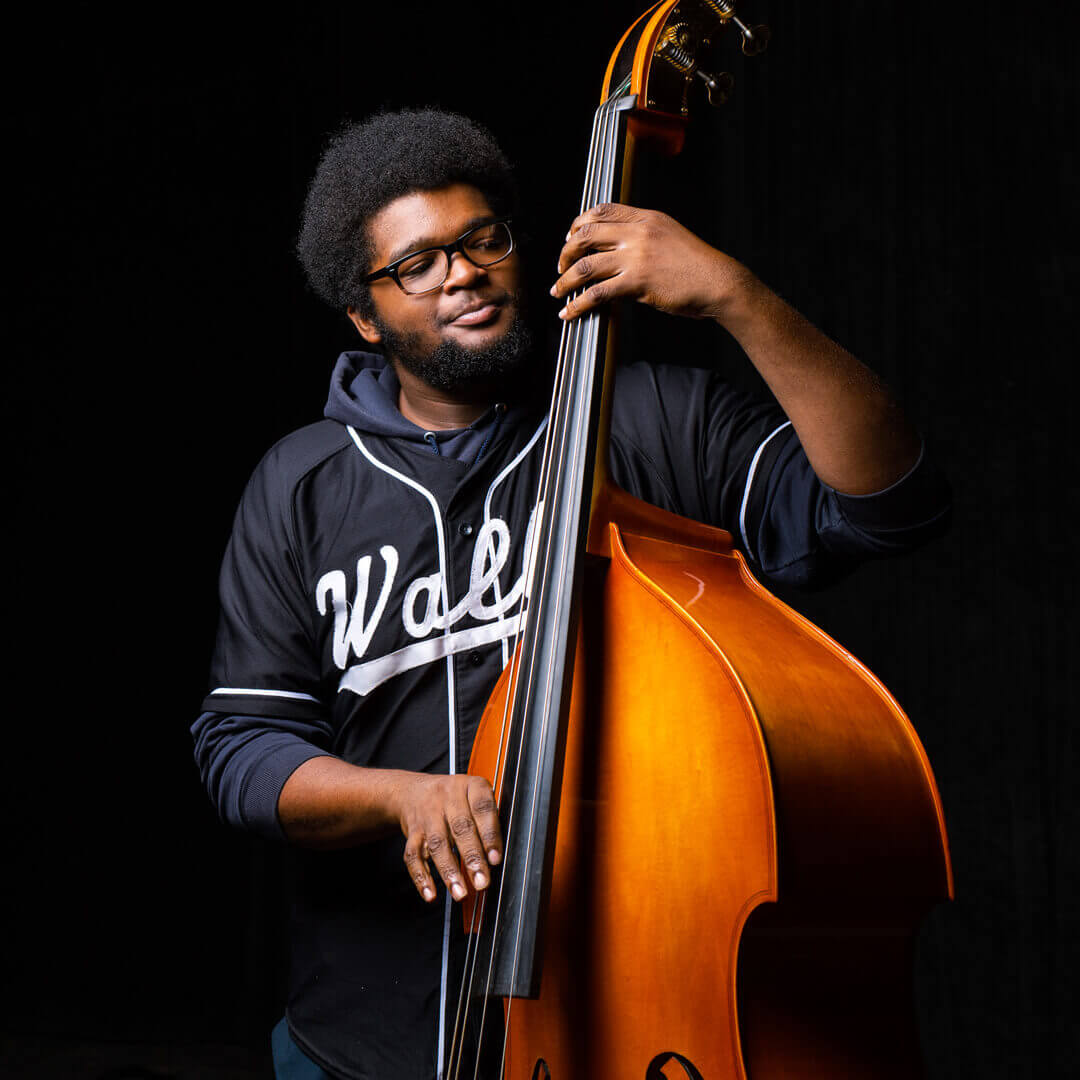 Bachelor of Music in Performance Bachelor of Music in Music Education Bachelor of Music in Jazz Studies

Corcoran Holt ’04 (Bachelor of Music in Jazz Studies) is a jazz bass artist and teacher. He currently leads his own group and is the regular bassist in the Kenny Garrett Quintet. He was semi-finalist in the Thelonious Monk Bass Competition and has performed live at Lincoln Center and at music festivals around the globe. Corcoran received the Shenandoah Alumnus of Excellence Award in 2016 and was recently back on campus to perform with the Shenandoah Conservatory Alumni Jazz Ensemble in a tribute to Dr. Robert Larson ’08. Visit www.corcoranholt.com to learn more.

Bachelor of Music in Jazz Studies

Guitarist bassist and vocalist Matthew Berry ’06 (Bachelor of Music in Jazz Studies) is a freelance artist, songwriter and teacher based in Germantown, Maryland. Berry has performed with a wide variety of artists and groups throughout the region, including devoN Nickoles, Spilled Milk, Honey Extractor Classified Frequency and Delta Spur, among many others.

Kevin Johnson ’11 (Bachelor of Music in Music Production & Recording Technology) is the Managing Editor for No Treble, which he joined as a contributor in 2009. A true bass enthusiast and activist, Johnson is a freelance artist and teacher in the Northern Virginia area, and the Jazz Division Head for the Bass Coalition, which seeks to foster community and education through promoting local bass events including workshops, performances and other events.