To learn more about the Jazz Ensemble, contact Matt Niess at mniess@su.edu.

The Shenandoah Conservatory Studio Big Band (formerly known as the Shenandoah Conservatory Jazz Ensemble) was founded in the late 1950s as one of the first collegiate jazz ensembles in the country and has a long tradition of excellence. The group has performed with numerous jazz legends, toured China, Japan, Ireland, Iceland, Germany, Spain, France, and Senegal, Africa, and won acclaim at multiple major jazz festivals.

The mission of the ensemble is to highlight prominent jazz composers and significant stylistic periods, providing the performers and audience a breadth of repertoire. Themed concerts play an important role in the band’s programming.

Many graduates of the band have gone on to prominent careers in jazz. A select few of these include composer/arranger Alan Baylock ’90 (B.M. in Music Education), an icon in the jazz publishing field and currently directing the renowned University of North Texas 1 O’clock Lab Band. Living in New York, bassist Corcoran Holt ’04 (B.M. in Jazz Studies) plays and records with a wide range of jazz greats, touring most prominently with saxophone legend Kenny Garrett. Trumpeter Ashlin Parker ’05 (B.M. in Jazz Studies) has become a well-known figure on the New Orleans jazz scene and is often heard performing and touring with NEA Jazz Master Ellis Marsalis. Jazz drummer Billy Drummond ’81 (B.M. in Jazz and Performance) has had an extensive career since graduating from Shenandoah, touring and performing with a long list of the some of the most important names in jazz. 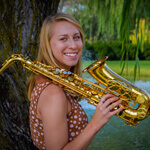 The jazz department at Shenandoah Conservatory has provided me with endless opportunities and professional experience. It is unique in that students are studying with world-class musicians individually while gaining the experience of playing in large jazz ensembles and smaller jazz combos. I had the incredible opportunity of touring and performing in the great Northwest and Vancouver, British Columbia with the Shenandoah Conservatory Jazz Ensemble as a junior at Shenandoah. In addition, the jazz department brings in clinicians from around the world to further the education of the students.

Jazz Ensemble Tour of the Great Northwest • May 2017

The Shenandoah Conservatory Jazz Ensemble toured the Pacific Northwest in May 2017 with nineteen students and four faculty. Highlights included performances at Reynolds High School and the University of Portland, as well as a trip to Multnomah Falls on the Columbia River in Oregon; performances at the Central Washington University Jazz Festival as a featured college ensemble and Bellevue College, as well as visits to the Space Needle, Pike Place Market, Bainbridge Island and the Future of Flight Boeing Museum in Seattle, Washington; a performance at Pat's Pub, Vancouver's most popular jazz venue, and tours of the Capilano Suspension Bridge and Stanley Park in Vancouver, Canada.