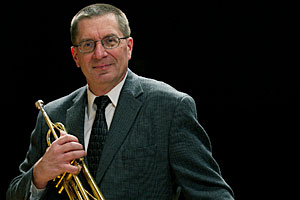 Craig Fraedrich received his undergraduate degree in jazz performance from North Texas State University and master’s degree from Arizona State University. He also studied at the University of Wisconsin-Milwaukee and the Banff Center for the Arts. He was awarded music scholarships at each of these institutions and won numerous solo awards at jazz festivals throughout the country. He was a winner of International Trumpet Guild Jazz Solo Competition and leader/director of the first student combo to perform at the International Jazz Educators Conference.

He spent over thirty-one years as a featured jazz trumpet soloist with The U.S. Army Blues, one of the nation’s premier full-time jazz ensembles. During that time he also served as the group’s musical director, trumpet section leader and group leader. He composed or arranged well over 100 pieces for the band and has traveled extensively both performing and serving as a clinician. In addition to visiting much of the United States, he has performed in Australia, Japan, Sweden, Norway, Germany, China, St. Thomas and at the Montreux Jazz Festival in Switzerland.

Fraedrich has pursued a significant solo career as well. He has released twelve CDs with his own groups and has appeared on dozens of others as a side-man. His 1994 release, So In Love (with Dave Liebman) reached number twelve in national jazz radio play according to Billboard Magazine. His most current release on Summit Records, All Through the Night, is now available.

He is a dedicated educator and has been a faculty member (Associate Professor) at Shenandoah Conservatory since 1989.

More so than anywhere I have been, students at Shenandoah Conservatory seem to find where their passions in music lead to a career.

Highlights have included leading the Shenandoah Conservatory Jazz Ensemble on trips to Ireland and Senegal, and presenting concerts to benefit 25:40, a charity dedicated to helping orphans and other children affected by AIDS in South Africa.

25:40 One Child At A Time
Saving South Africa’s orphans from AIDS, poverty and violence.