Shenandoah University is teaming up with Linfield College in Oregon to take part in the College Football Playoff in California. The Shenandoah Team will be partnering with two students — Brooke Snyder and Taylor Cole — and one faculty member — Dr. Denise Farag — from Linfield College.

The partnership between the two schools began when Miles Davis, former dean of the Harry F. Byrd, Jr. Business School, was named the president of Linfield College in January 2018.

Linfield College is in the process of building a nationally recognized program in sport business management. Shenandoah University is honored to partner with them as we also strive to gain national exposure. It is a great example of teamwork and synergy focused on students and experiential learning.” All Shenandoah students attending the College Football Playoff are members of the Sport Business Association. Each student was required to apply with a cover letter, résumé and business card, followed by an interview. Through an extremely competitive process, these six students were chosen from a field of nearly 20 applicants. The group is working hand-in-hand with the operations team for the College Football Playoff. Three members of the group —Jared Lowry, Michael Nguyen and Kit Gould — worked as Spirit Squad team hosts/liaisons for the winner of the Orange Bowl game between University of Alabama and Oklahoma University. This job entailed providing assistance or logistical support needed for the band and cheer squad from each participating school. The remainder of the team attending will be handling various assignments, all of which will be given by the Santa Clara Host Committee.

Six Linfield students applied for the chance to be “on the job” with professionals at the College Football Playoff game and went through a rigorous screening process. The two Linfield students — Taylor Cole and Brooke Snyder — will also be enrolled in Linfield’s popular career exploration course in sport management as part of the experience.

Students attending the playoff will learn and gain knowledge of event operations and what it takes to put on a major sporting event. The group will learn the behind-the-scenes details that make up the days leading up to the game as well as game-day operations with the College Football Playoff operations team and the Santa Clara Host Committee. The goal is to come away with experience that students can use to separate themselves in the competitive job world through resumes, career building and experiential learning.

Dr. Polite, Daniel, Andrew, and I helped volunteer in the Media Auxiliary Press Box to deliver play-by-play stats to the media personnel at the end of every quarter. The biggest perk was not only was I able to attend the Championship game but we had an amazing view of the game and got to watch up until 2 minutes left of each quarter. Being able to be involved in that way was truly a once in a lifetime experience.” The most memorable part of the experience for me was walking into the auxiliary press box hearing the screams of almost 75,000 fans. This was an extraordinary opportunity to network and meet people in my future career”

Being able to go on the field and walk around after the game was an amazing opportunity. Then as we were walking out, we noticed Dabo Swinney finishing up an interview and were able to get a picture with him before he left. It was definitely an amazing experience.” 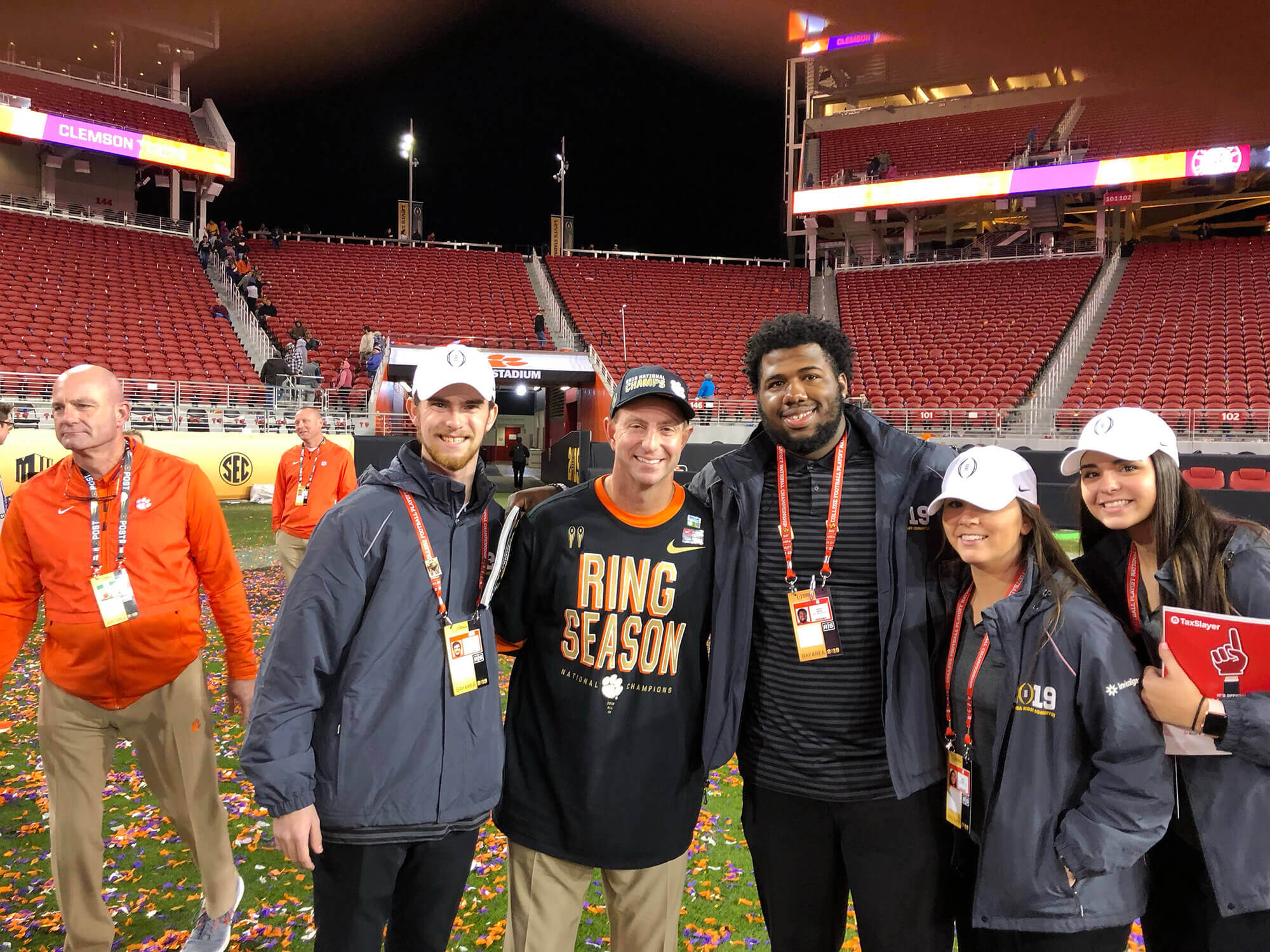