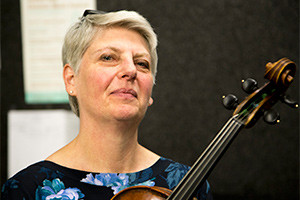 Lederer has been a jury member of the Coleman Chamber Music Competition and represented the United States as a jury member at the Eighth Banff International String Quartet Competition in 2004. In addition to her position at Shenandoah, she also teaches at Kneisel Hall in Blue Hill, Maine, the Idyllwild Arts Summer Program in Idyllwild, California, and the Chautauqua Institution in New York. She has also served on the faculties of The International Festival at Round Top, Texas and The Apple Hill Center for Chamber Music in New Hampshire.

Lederer’s 4 solo CD albums on the Centaur Label of 20th century English Viola Music have received international critical acclaim. As the violist of the Audubon Quartet, she can also be heard on the RCA, Telarc, Centaur, Orion and Opus One record labels.

Lederer has performed with the Marlboro Music Festival and toured with Music From Marlboro. She has appeared as soloist with the Seattle Symphony, the Czech Philharmonic Chamber Orchestra, the Chicago Sinfonietta, and the Albuquerque Chamber Orchestra, among others.

Born in Istanbul to European parents, Lederer grew up in Seattle, Washington, where she began her study of the viola at age nine with Vilem Sokol. She studied with Georges Janzer at Indiana University and subsequently attended the Curtis Institute of Music, where she studied with Michael Tree, Karen Tuttle, Felix Galamir and Mischa Schneider.