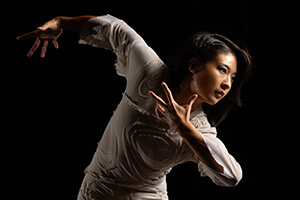 Carson also dances and acts as assistant director for Christopher K. Morgan & Artists (CKM&A, directed by Christopher K. Morgan), resident company of Dance Place in Washington, D.C., with whom she has performed at the Millennium Stage at the John F. Kennedy Center for the Performing Arts, Sidney Harman Hall, as well as The Alden Theatre in McLean, Virigina. She has also traveled across the United States on a nine-city tour as rehearsal director and member of the creative and production team for “Pōhaku.” From her performance of Christopher Morgan’s solo work “Selling Out,” Carson has been described as a “very talented dancer” by IsItModern? and Carmel Morgan of CriticalDance observed her as “absolutely ripping the solo to shreds.” Carson’s choreography has also garnered praise from Ms. Carmel Morgan, who described Carson as having achieved “a choreographic home run” for her 2014 work, “Deprivation.” Ms. Morgan also stated of Carson’s 2018 work, “B.U.G. [Backlight. Uplight. Glare.]” is another certified hit for Carson, and it would be a smart move for companies to commission her choreography.” Carson has conducted CKM&A’s annual winter and summer intensives as well as numerous residencies at universities and colleges, with Mr. Morgan, and has traveled with the company to France to conduct an intensive at the Ècole Superieure de Danse de Cannes Rosella Hightower. This is her 9th season with the company.

In addition to her teaching and dancing in the Virginia/D.C. area she is also a member of BARE Dance Company with Mike Esperanza (since 2007) in New York City and a teacher at Sacred Heart University in Fairfield, Connecticut. Often traveling nationally, Carson feels extremely privileged to work with so many dancers as a dance educator sharing her knowledge and experiences hoping to inspire the next generation of artists.

Start each day with a positive thought!

“Speaking of artistic growth, not only did I get to witness Morgan’s ascendance as a choreographer, but I was able to see Tiffanie Carson bloom, too. Each female performer in “In the Cold Room,” gave an outstanding performance, but Carson, who was recently named Assistant Director of CKM&A, eclipsed all I’ve seen her do in “Selling Out,” a 2011 solo originally choreographed by Morgan for himself. It was intensely interesting to see “Selling Out,” a very personal work which has an abundance of masculine sorts of movement (flexed arm muscles, for example), performed by a woman. Carson shone as a someone conflicted about how to please others while maintaining one’s integrity. While she struggled with the selling it/selling out problem, she absolutely ripped the solo to shreds. What a joy it was to see Carson powerfully tackle this piece.” – Carmel Morgan, CriticalDance.Org