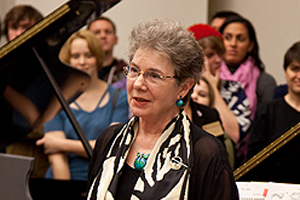 Received an ARTIE Award by the regional Shenandoah Arts Council in 1990.

Founding member of the Conservatory’s resident Shenandoah Trio (violin, cello and piano) with which she has performed extensively.

Established the first Artist Series at Shenandoah University and was chair of the committee which developed the Conservatory’s Community Arts Program (now Shenandoah Arts Academy).

Former member of the Craftsbury Chamber Players in Vermont, performed numerous concerts with the Lenape Chamber Ensemble in Pennsylvania and held a position as coach/accompanist at Chautauqua School of Music in New York state.