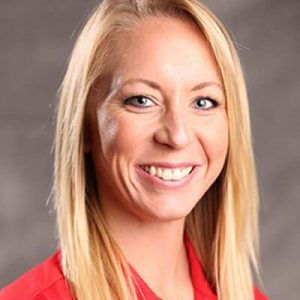 Brittany Tetlow Cline ’12 chose Shenandoah University because she had a great experience during her application and interview process. While at Shenandoah, Tetlow earned her Masters of Science in athletic training and Doctorate of Physical Therapy in just 3 ½ years. As a class representative on the admissions committee for the Division of Physical Therapy, she assisted with open houses for inquiring students and potential applicants. Tetlow also completed clinical rotations as a student athletic trainer with Shenandoah’s football, women’s soccer and men and women’s basketball teams.

Tetlow wanted to pursue the athletic training career field because she loves sports and is highly intrigued by the human body, how it performs, heals and reacts to the physical demands athletes apply to it. She also wanted a career that would be meaningful, consistently challenging and a career that allows her to interact with people on a daily basis.

Upon graduation, Tetlow was temporarily hired at EXOS, formerly known as Athletes’ Performance in Phoenix, Arizona. In this position, she assisted in emergency care and rehabilitation for the 2013 National Football League (NFL) Scouting Combine. The NFL Scouting Combine is a week-long showcase, where college football players perform physical and mental tests in front of NFL coaches, general managers, and scouts. After that, Tetlow became a physical therapist and athletic trainer for The Center For Orthopedic And Research Excellence (CORE) Institute in Phoenix, Arizona. Most recently, she has accepted a position as an assistant athletic trainer at the University of California San Diego in San Diego, California.

Shenandoah’s dual PT/ATC program opened many doors for Tetlow both as a student and as a new graduate. She feels strongly about “the strenuous curriculum, the faculty’s high regard for student competency and proficiency, and the university’s commitment to success make the dual degree program one of a kind.” “While completing clinical internships, I was told by multiple instructors that my skill set and level of professionalism surpassed that of students from various other programs and I consistently received high marks on both midterm and final evaluations. Upon graduating, I was highly competitive among other applicants, I received multiple job offers, and was ultimately able to then choose the best position for me as I launch my career in sports medicine and rehabilitation.”