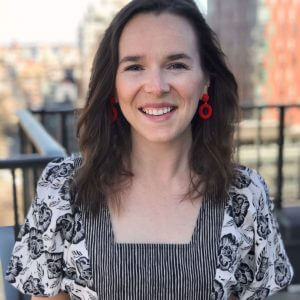 Erin Long Krellenstein ’13 chose Shenandoah University because she knew in her gut it was the right fit for her. She felt a sense of ease when auditioning with Shenandoah Conservatory and a strong sense of community while touring the campus. “I knew that I could completely be myself; in a classroom setting, in a social setting, and also creatively,” said Krellenstein. “I appreciated how within the musical theatre program that our teachers were focused on using our individuality, instead of molding us to be what perhaps the theatre industry expected of us. I knew that I wanted a really strong sense of community in my college experience and that is exactly what I received from Shenandoah.”

Krellenstein’s fondest memories during her time at Shenandoah include hanging out in the Ruebush Hall lobby in between classes, the annual Shenandoah Apple Blossom Festival, being a work-study student in the conservatory office, Alpha Psi Omega’s Guerrilla Theatre Nights, 8 a.m. ballet class with Adjunct Assistant Professor of Dance Robyn Schroth, M.A., midnight breakfasts during finals week, and forging long-lasting friendships. She also cherishes all the theatrical experiences she was able to have at the university whether she was performing or was watching as an audience member.

“Shenandoah University is truly a special and unique place. I’m not sure you will find a more creatively engaging, progressive and welcoming school.”

Krellenstein is a seventh grade theatre teacher and artistic associate for the New York City Charter School of the Arts in New York, New York. In this role, she introduces students to basic acting techniques and skills. In the fall, Krellenstein helps coach eighth grade students with their high school audition material (monologues and songs) before they audition for some of the top performing arts high schools in the country. Then, as an artistic associate, she plans and manages the showcases for the school’s artistic disciplines, which help track student data and development in their programs.

“I work to establish and nourish a love and appreciation of theatre in my students,” said Krellenstein. “The most important thing to me in my teaching is that my students feel like they have a community in our classroom and a space to be absolutely, 100 percent themselves.”

Krellenstein also spent five years in the United Service Organizations (USO) Show Troupe and she traveled all over the country and overseas to perform for active duty military, veterans and their families. This is one of the greatest experiences and honors of her life.

The most rewarding part of Krellenstein’s current position is the spring musical the school produces every year, specifically their latest production of “Moana JR.” The school was asked by Disney Theatricals to collaborate with them as they reworked Moana into one of their highly sought-after “Disney Junior” titles. “Our kids really connected to it and we were absolutely thrilled to get to be one of the first schools to perform it,” said Krellenstein.

Another rewarding experience in Krellenstein’s career was playing Jo March in Gateway Playhouse’s performance of “Little Women” with her fellow Shenandoah alumnae Chelsey Smith ’13 and Catharine Kuntz Murray ’13, who played Beth and Meg in the production. “This was an absolutely dream experience,” said Krellenstein. “Not only was I able to perform a role that has meant so much to me, but I got to do it alongside two of my college best friends and roommates. What a gift it was to spend two months rehearsing this piece with them and telling this beloved story together.”

Krellenstein believes she received a rich, well-rounded theatre education from Shenandoah and it prepared her on so many different levels for her career. She was taught the business side of the industry, how to balance life with lots of interest and the value in being a kind person. “Shenandoah’s BFA in Musical Theatre is different from other schools in that they focus on how to be not only a successful actor, but more importantly, how to be a successful person in our world,” said Krellenstein. “As a student there, you learn how to create your own opportunities to perform and collaborate with others.”

Krellenstein’s advice to students is: “To remember that no one’s path is clear or uniform. I have found that there are always ebbs and flows. Your path will look very different from others around you and this is ok – in fact, it’s good! Remember that success comes in all different forms and variations. I would say to look for the opportunities that you think are scary – those are probably the ones that will benefit you the most. And always lead with kindness. People want to work with kind people.”